Friday - July 1, 2022
On Gulfport
Your One Stop Site For Everything Gulfport, Mississippi
Home » Reviews » Movie Reviews » The Force Ricochets

In the beginning, there was the Word…or a bunch of words, anyway. They began with, “It is a period of civil war. Rebel spaceships, striking from a hidden base, have won their first victory against the evil Galactic Empire.” Once seen, it was impossible to forget.

Film historians will tell you the first blockbuster was Steven Spielberg’s Jaws in 1975. That’s true, but there’s a galaxy’s worth of difference between a blockbuster and a frickin’ phenomenon. On May 25, 1977, Star Wars changed everything. The brainchild of George Lucas erupted from theaters and soon laid claim to toys, books, music, clothing, and an absolutely godawful holiday special.

For a while there, Star Wars was bull 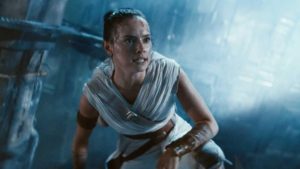 etproof. It didn’t matter that Return of the Jedi was only two-thirds of a good movie. It didn’t matter that a large number of connected novels were poorly written. Hell, it didn’t even matter that the release of the Prequel Trilogy captured the imagination of the public like a wet fart. Ultimately, it was always understood that underneath it all was a strong core, the product of a vision.

Things changed in 2012 when George Lucas sold Lucasfilm for $4.05 billion to Disney. The Mouse House now oversaw his galaxy, and the legacy of his company was secure. Barely after the ink was dry on the contracts, plans were made.* Disney did what it excels at, which is pumping out content. A continuation of the Skywalker Saga began in 2015 with Star Wars: The Force Awakens. That trilogy, along with 42 years of themes, narrative, and expectations comes to a close with Star Wars: The Rise of Skywalker.

Remember Kylo Ren (Adam Driver)? When last we saw him, he had assumed control of the villainous Empire…I mean, First Order, tried and failed to stamp out the Rebellion…I mean, the Resistance, and did battle with his mentor Luke Skywalker (Mark Hamill) who was revealed to be an exceptionally sneaky Force Ghost. Have those experiences seasoned young Master Ren into a wiser and cannier opponent? They have not, and he’s still the same old lovable scamp who enjoys wholesale slaughter and counterproductive temper tantrums.

After killing the hell out of a bunch of luckless chumps, Ren descends into the depths of a hidden planet. He finds Emperor Palpatine (Ian McDiarmid), who has been a busy little Sith lord despite the minor inconvenience of having been dead. It turns out he’s been creating clones and waiting for his long-lost heir. The plan is to activate a thing called The Final Order which will subjugate the galaxy, resurrect the Sith order, and cause everyone to have a pretty crappy day.

The good news is, there’s a band of plucky rebels on hand to stop them. Yes, still. Our old pal Rey (Daisy Ridley) has been diligently training to be a Jedi, and she’s become a dab hand at yanking stuff around with the Force and swinging around her lightsaber all willy-nilly. Daredevil pilot Poe Dameron (Oscar Isaac) continues to buckle swashes whenever possible, while ex-Stormtrooper Finn (John Boyega) continues to have a frustratingly underwritten personality.

Their leader remains Leia Organa (Carrie Fisher), who desperately seeks an advantage against the First Order. Due to the efforts of a spy, she just might have one. Now they must seek out a Sith artifact, the corpse of an assassin, his ship, and a mystical dagger emblazoned with clues leading them to the truth. Yep, there’s an awful lot of time spent seeking out things or people.

Let’s take a moment to imagine you’re seeing your favorite band in concert. You’ve gotten good seats and the sound quality is exquisite. They take the stage, and your musicians of choice play all the hits, but only the hits. Then, a tribute band joins them onstage, and they proceed to play the hits. That’s what The Rise of Skywalker is, and it’s designed to give the fans what they want and nothing else at all.

Look, I still believe that as much as The Force Awakens played it safe, it skillfully rejuvenated the Star Wars brand and was a fun time at the movies. I also believe that The Last Jedi took some big chances and did so with a high degree of skill. That film also was the most divisive film in the franchise, and going forward, the creators of The Rise of Skywalker had quite a job ahead of them. Their job was to bring audiences more adventures with characters they love, wrap up years-long storylines, deliver thrilling spectacle, and simultaneously close out a franchise while prepping audiences for more down the road. Unfortunately for them, the film that actually did all those things successfully this year is Avengers: Endgame. 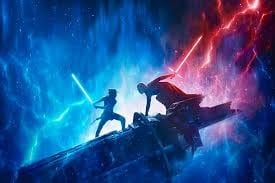 So that must mean I loathed The Rise of Skywalker, right? Not at all? Give director J.J. Abrams credit for consistently making terrific-looking films that are impeccably cast and feature inventive set pieces. There’s a lightsaber duel in the midst of crashing waves that’s gorgeous, and an extended sequence that would be right at home in the world of Mad Max. There were many, many moments where I caught myself thinking, “Oh, that’s cool!” Problem is, I was only affected by surface pleasures.

As so often happens, the root problems are with the screenplay. Derek Connolly, Colin Trevorrow, Abrams, and Chris Terrio hammered out the story and script, and it’s a story written from fear. Sure, The Last Jedi made over $1 billion at the box office, yet The Force Awakens made over $2 billion, and last year’s Solo underperformed with a hair under $400 million. Making matters worse, The Last Jedi had a 49 percent audience score on Rotten Tomatoes, compared to a 91 percent critics score.** Abrams and his merry group of scribes needed to deliver a crowd-pleaser or die trying.***

Their screenplay feels desperate. It’s as if, with a slightly mad gleam in their eyes, Abrams and co. are vigorously fan-servicing the audience and yelling, “DO YOU LIKE THIS? WHAT ABOUT THIS? HERE’S A LIGHTSABER FIGHT AND A TON OF SPACESHIPS AND ANCIENT PROPHESIES! HERE’S EVERYTHING YOU LOVE!” Over and over they call back to the Original Trilogy, and it feels like they have so little faith in the present that they need to refer to the past. Speaking of the past, the script repeatedly sidelines, undercuts, or straight-up changes plot and character points established in The Last Jedi. In typical Abrams fashion, it also does so at high speed. By the time you’ve realized a thing doesn’t make sense, the film has rocketed you to a totally different thing that also doesn’t make sense—yet is awfully cool looking. This franchise succeeds when it melds mythic archetypes, swashbuckling adventure and, yes, low-key ripping off other movies. It’s always done so with high confidence, and if there’s one thing Star Wars should never feel like, it’s desperate.

For decades, it’s been fashionable to sneer at the Star Wars movies for stilted and amateurish acting. Like many commonly held beliefs, it’s wrong. You need only look at the performances by Daisy Ridley and Adam Driver for proof. At no point are either of them phoning it in, and while they know they’re in a big-budget space fantasy, they never wink at the audience. They take the emotion seriously and deliver acting that’s layered and intelligent. Oscar Isaac’s Poe is a creature of almost pure charisma, and while he doesn’t have quite as much to do from a performance standpoint as last time out, he’s still great fun. Supporting turns from Keri Russell and Richard E. Grant are great fun, and I particularly enjoyed Joonas Suotamo’s clever performance as Chewbacca.

Let’s also take a moment to mourn how, throughout this trilogy, John Boyega has been done dirty. The idea of him playing a Stormtrooper who goes AWOL and develops a conscience is a damn good one. The Force Awakens left his character in an interesting place. The Last Jedi never quite knew what to do with him and saddled him with a subplot that kept putting the brakes on the movie. That trend continues here, and Finn, unfortunately, becomes a third wheel. Boyega is a smart and creative actor who could have had a brilliant role if only the filmmakers knew how to capitalize on it.

In the end, I suppose it doesn’t matter. Star Wars means a great many things to a great many people, and I don’t begrudge them a little joy this holiday season. Perhaps you’ll walk out of the theater feeling that pleasurable rush of dopamine. If so, that makes me happy. What also makes me happy is, despite the considerable disappointment I felt towards The Rise of Skywalker, Star Wars isn’t over. The cynical view to take is that it’s too big to fail, and too lucrative an IP to reject. The real view is that, right now, passionate and talented people are doing what matters. They’re devising stories,**** doing the brutally underappreciated work of illuminating the hidden corners of the galaxy, and igniting our imaginations. They’ll explore. We’ll follow.

*Or “schemes were hatched,” if you prefer.

**This is subject to change, but as of this writing, The Rise of Skywalker has an 86 percent audience score and a 57 percent critics score.

***When it comes to big popular entertainment, filmmakers walk a tightrope. You have to deliver something that people enjoy. You also have to have almost sociopathic confidence in your story. I give George Lucas a perverse degree of credit for the Prequel Trilogy. He made exactly the movies he wanted to make, and he gives zero f’s if we like them or not.

****It cannot be overstated how much credit Dave Filoni is due. He’s responsible for creating The Clone Wars and Rebels TV series and is a co-creator of The Mandalorian.

Tim Brennan
Tim has been alarmingly enthusiastic about movies ever since childhood. He grew up in Boulder and, foolishly, left Colorado to study Communications in Washington State. Making matters worse, he moved to Connecticut after meeting his too-good-for-him wife. Drawn by the Rockies and a mild climate, he triumphantly returned and settled down back in Boulder County. He's written numerous screenplays, loves hiking, and embarrassed himself in front of Samuel L. Jackson. True story.
Tagged: adam driveranthony danielscarrie fisherchris terriodaisy ridleyj. j. abramsjohn boyegamark hamilloscar isaacstar wars the rise of skywalker
OnGulfport.com is a directory and information guide for Gulfport, Mississippi.
Discover the best of Gulfport shopping, restaurants, night life, breweries, events, business, outdoors, fun, local life, real estate, transportation, jobs, and schools.
Looking for what to do in Gulfport? OnGulfport.com has columnists, and bloggers to keep you up to date on the best of Gulfport, Mississippi.